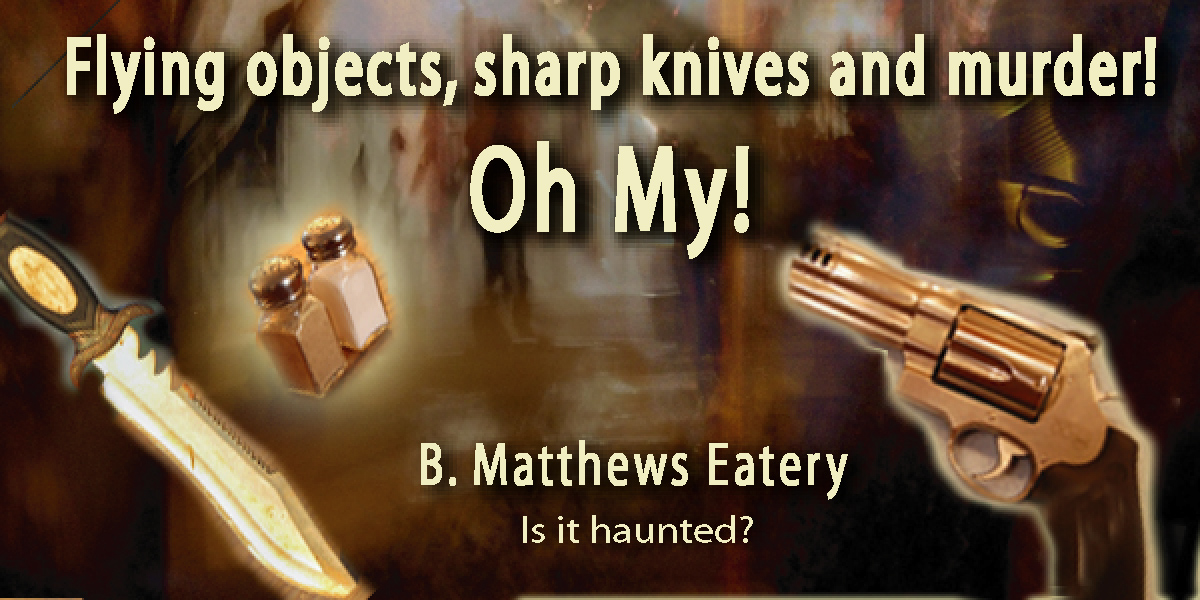 The building at 325 East Bay Street where B. Matthew’s Eatery is located has the prestige of being one of the oldest buildings in Georgia. (1790) Resourceful Savannahians put the building together using old cobblestones and wood from a sailing ship. That alone should make it a good place for a forlorn sailor ghost, but there’s more to this building to stir up some restless spirits.

In the basement, there’s a bricked up entrance to a tunnel leading to the Savannah River and some suspicious huge iron rings in the walls. It’s a sure sign that slaves were the merchandise being kept and sold. And therefore it wouldn’t be unexpected to have some restless angry spirits lurking in the basement.

In the 1920’s, when alcohol was against the law, it housed a “Speakeasy” where drinks and good times flowed freely. After Prohibition the bartenders sold booze out a window for easy sidewalk-service. It would only be typical of Savannah to find a ghostly customer tapping on the window for a to-go cup.

During the 1950’s, when black and white patrons were segregated, the tavern had a black side and a white side. The bar in the center served both sides, but rumor has it that this led to a murder. The black bartender started dating the white bartender’s daughter. The daughter’s mom got upset and shot the black bartender dead, which can only mean there might be a disgruntled ghost employee serving up drinks to unwary living customers.

Is there evidence of hauntings at B. Matthew Eatery? Do misplaced objects, flying salt and pepper shakers, cabinets swinging open, sharp knives stuck in the floor and two dark shadow spirits in the basement make you a believer? Or does it just make you a patron enjoying fine dining in one of Savannah’s most excellent restaurants?

Go find out for yourself and see what’s on the menu.

The Shrimp Factory on River Street in Savannah is the-place-to-go for some delicious local seafood. Today it’s decorated with coastal art displayed on old Savannah brick walls, but in 1823 it was a cotton warehouse.

The story goes that slaves worked all day in poor conditions pushing and hauling bales of cotton from the warehouse to shipping vessels. It’s understandable that perhaps a few might’ve died in the building and their spirits might be haunting The Shrimp Factory. Muted voices and rattling chains and unexplainable sounds are often heard on the top floor (where the slaves were kept) and when investigated nobody is there.

During the summer the staircase leading to the storage room is hot, but sometimes in the evening, about halfway up the stairs there is a blast of cold air.

Some employees believe the cold spot is the ghost of a former employee named Joe. Although Joe was in good health, for some unknown reason he dropped dead on the staircase in August 1977. Joe also likes to hang out in the liquor storage room and, upon occasion has been known to knock over a few bottles of rum. He’s also been thought to be the mischievous culprit responsible for flickering lights and shutting down of all things electrical.

So if your in the mood for some popcorn shrimp, oysters on the half shell and want to enjoy watching the ships go up and down The Savannah River, then this might be a good place to go for dinner.

And if the ghost sitting at the next table asks for the hot sauce, please have some respect for the dead and pass it on over. It’s the polite Savannah thing to do.