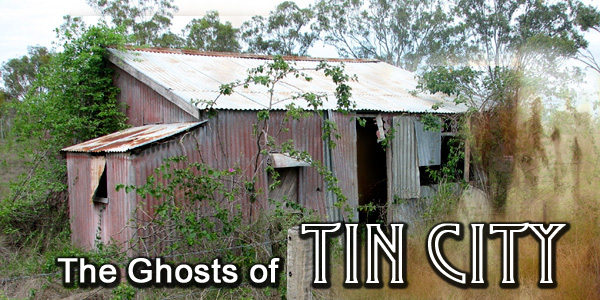 You can look for the location of Tin City on a map of Savannah, but you won’t find it. Like the ghosts that haunted it, the whole place just up and disappeared.

Tin City used to be east of Savannah nestled in overgrown grassland and abandoned rice fields. It was established in 1929 by an impoverished African-American man, Louis Ellis, who was granted permission to settle there. He built a home with discarded tin and scrap metal. He made a little garden for growing his own foods. Soon other African Americans joined him and they also built homes constructed of tin and junk metals. Soon Tin City became a little self-sufficient community and they even had a Mayor to represent them.

And of course they had a few ghosts

The Mayor, Nathaniel Lewis, had a short creepy annoying ghost that waited at his gate. If he talked to the spirit it would attack him, but if he ignored the spirit it wouldn’t do him harm. Naturally the Mayor pretended the ghost wasn’t there… but it was.

There were three ghosts that stood watch over what everyone believed was buried pirate treasure. The community made an attempt to dig up the gold, but just when they saw it at the bottom of the pit, the treasure fell deeper and out of reach. The three ghosts laughed and howled. Nobody went treasure hunting after that.

And of course Tin City had the usual dead folk who float around a few feet off the ground and don’t do much of anything at all. Except maybe when they fly in on a whirlwind and cause all sorts of trouble.

Tin City is gone, but what about the ghosts? Are they still there? Have they moved into Savannah and taken up residence in better accommodations?

Who knows what happens to places and people when they’re forgotten. Perhaps they linger on… waiting to be remembered.